April began with that weird juxtaposition of Easter and April Fool’s Day. As well as attending  the ritual festivities at St Stephen’s Cathedral on Easter morning I also joined a lively discussion  following Evensong at St John’s Cathedral: Christ Foolery: The Ministry of the Fool in The Christian Tradition  My contribution to the discussion was the introduction of  the patrons of my Holy Irritant blog, St Christina the Astonishing, Virgin and St Basil the Holy Fool whose icons  lead this month’s reflection.

My Easter celebrations continued into the second week of April when I joined the Catholic Byzantine Community of Our Lady of Protection in Woolloongabba who celebrated the feast using the Julian Calendar.

Careering Into The Future

This month  marks a milestone in my career as I bid farewell to friends and supporters at Micah Projects after more than 12 years of employment.

The invitation to celebrations that went out through various networks included this amazing image that says much about my work and ethic. A few years ago I created “ Bananaman”, a promotional character for our fledgling social enterprise in South Brisbane. That enterprise now includes Hope Street Café.

Bananaman has made his curtain call. The work of social change and advocacy includes wild humour, a good dose of eccentricity and a costume from eBay. The costume may be retired but the eccentricity and wild humour will continue in my work as a Community Jester.

Performance of the Month

The Story of Brisbane  with award-winning actors Therese Collie and Tim Mullooly was an extraordinary foray into history, local writers and  secrets of the Brisbane Powerhouse.  There will be a separate post coming about this soon,

Movie of the Month

If you only see one film this year make sure it is STOP THE BOATS. Simon Kurian has produced a documentary that exposes the stark brutality of the current culture of inhumane treatment of asylum seekers and refugees who come to our shores.

The film is harrowing, graphic and honest in its exposure of the abandonment of global responsibility, compassion and justice by our recent Governments formed by the two major political parties.

STOP THE BOATS will tear your heart apart. inspire your action to begin a new language and practice about asylum seekers and refugees and hopefully disturb your political conscience.

You can hardly reflect on April in Australia without a reference to ANZAC.  In recent years I have attended the ANZAC morning Mass at St Stephen’s Cathedral. While I respect the intention of praying for those have died in our armed forces I am disturbed by the presence and parading of military weapons during the liturgy. See my blog post here

Exhibition of the Month

The AFTM Emerging Artists Exhibition supports talented local outsider artists to further develop their creative vision under the guidance of a professional mentor and support from AFTM. This year’s selected artists were shortlisted by a panel of judges from over 300 entries in last year’s Brisbane Festival Exhibition. They are: Felicity Clarke, Margarita Iakovleva, Filippe Lombardo, Amy Mack and George Moraitis.

Under the mentorship of Art Consultant, Elizabeth Bates, the 2018 Emerging Artists have been given the opportunity to take part in an exhibition.

Political Commitment of the Month

Today and every day until #Nabka, May 15 I will wear my #Keffiyeh. This act is a statement of solidarity with the protests in Gaza and a condemnation of the Israeli Government and military for their abuse of human rights.

As an Australian I wear my Keffiyeh to protest the silence of our major political parties and our diplomatic failure to censure Israel for its violence against the Palestinian Community. 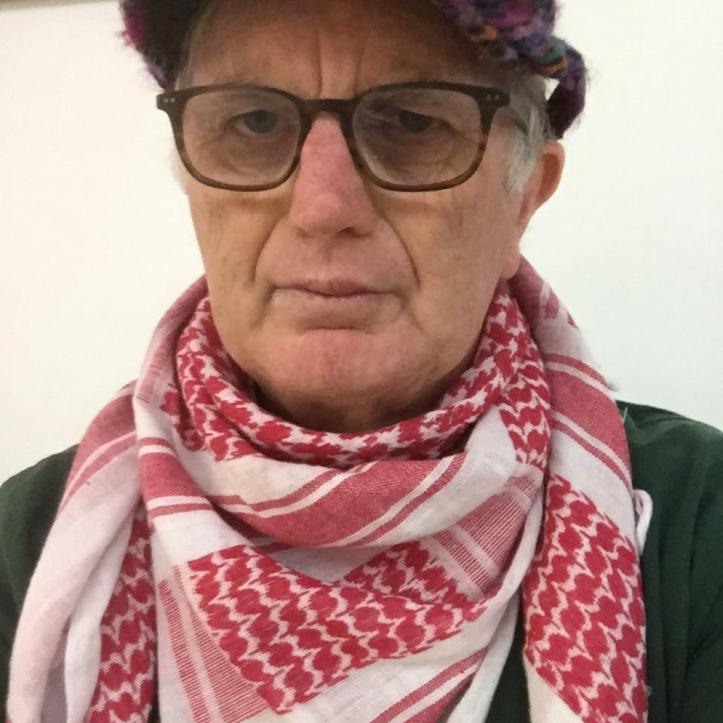